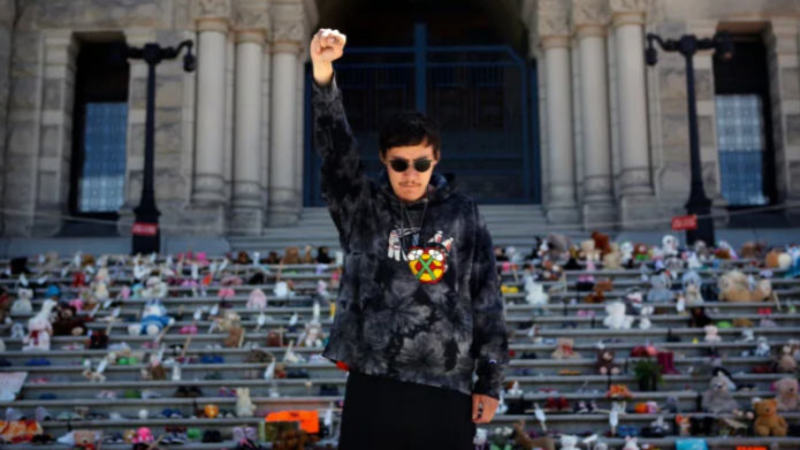 An NDP bid calling on the government to recognize the residential school experience as genocide has been rejected in the House of Commons.

The NDP later said some Liberals also voted against the motion, but party whip Mark Holland denied that and said only Conservatives said "nay."

"It is unfortunate that parliamentarians continue to deny the genocide that occurred in residential schools," Gazan said.

"There is no reconciliation in this country without truth. I will continue to work with leadership, Indigenous families, nations, survivors to push for justice."

Reached by CBC News, Barlow declined to say whether he yelled "nay."

The NDP says that, had the motion received unanimous consent, it would have shown Parliament's willingness to acknowledge genocide and could have had implications in residential school-related litigation.

Gazan said she believes the residential school era meets the definition of genocide drafted by the United Nations, which describes it as an attempt "to destroy, in whole or in part, a national, ethnical, racial or religious group."

The UN definition cites various forms of genocide: killing members of a group, causing serious bodily or mental harm to members of a group, deliberately inflicting conditions to bring about a group's physical destruction in whole or in part, imposing measures to prevent births and forcibly transferring children from one group to another group.

Some experts disagree with using the word genocide to describe the residential school era.

Frank Chalk, a history professor and co-founder the Montreal Institute for Genocide and Human Rights Studies at Concordia University, said he does not see evidence of criminal intent, which is required by the UN convention on genocide.

Instead, Chalk said, he sees evidence of criminal negligence in the attempt to strip Indigenous children of their languages and beliefs.

"All of those steps constitute part of what we call ethnocide — the attempt to destroy a group's culture," Chalk said.

Chalk also said the debate over genocide distracts from work the federal government should be doing to advance Indigenous rights.

"If we quibble endlessly over the legal definition of genocide and how it applies to the victims of the residential schools, we will distract ourselves from concrete measures that we need today," Chalk said.

"The real issue is how do we institutionalize in the future ... respect for Indigenous cultures, land rights, clean environments and jobs, as they choose them, not as we choose them in the colonial sense."

Chalk said he prefers the term "cultural genocide", which was used by the commissioners of the Truth and Reconciliation Commission (TRC) in their final report on residential schools.

But Gazan said the word genocide needs to be used because "cultural genocide" does not exist in international law.

Fannie Lafontaine, a law professor at the University of Laval who holds a Canada Research Chair on International Criminal Justice and Human Rights, agrees.

Lafontaine said the TRC didn't have a mandate to decide on legal liability and she believes the residential school experience should be recognized as a genocide.

"You can destroy a group by destroying its social fabric, its social unit, and I think this is what Canada has been doing across decades," Lafontaine said.

"Canada has committed a different kind of genocide."

Lafontaine said the definition of genocide is not limited to massacres and can include events that occur over a long period of time. She pointed to the forced transfer of children from their families to residential schools as an example of a genocidal act.

Lafontaine contributed to the 2019 legal analysis for the National Inquiry into Missing and Murdered Indigenous Women and Girls, which concluded violence against Indigenous women and girls amounts to genocide.

Prime Minister Justin Trudeau used that word after he accepted the inquiry's final report and repeated it last week when the national action plan was released.

Lafontaine said there are legal consequences to the government acknowledging genocide — consequences which require full implementation of the inquiry's recommendations and those of the Truth and Reconciliation Commission.

"It's structural change," she said. "It's recognizing the damage that colonization has done and undoing that by giving back the power to Indigenous nations."