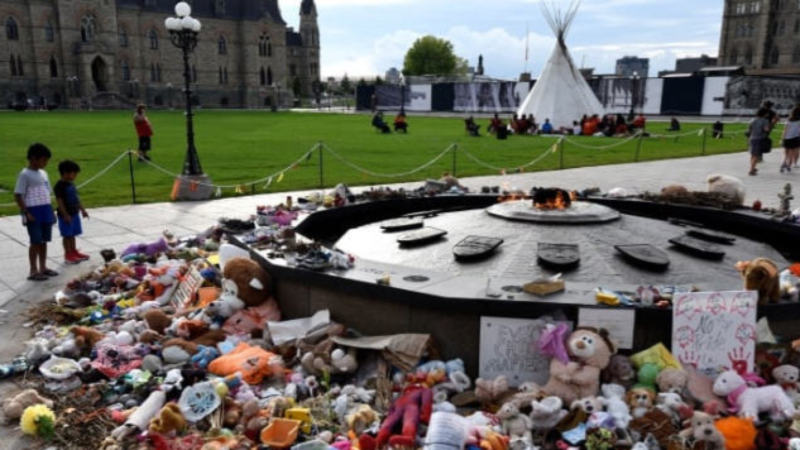 The Canadian Conference of Catholic Bishops (CCCB) has issued a public apology to Indigenous people in Canada for the suffering endured at residential schools, but the national chief of the Assembly of First Nations (AFN) says the church needs to follow up with "concrete actions."

Addressing the "Indigenous peoples of this land," the bishops issued a statement today saying that they "acknowledge the suffering experienced in Canada's Indian Residential Schools."

"Many Catholic religious communities and dioceses participated in this system, which led to the suppression of Indigenous languages, culture and spirituality, failing to respect the rich history, traditions and wisdom of Indigenous peoples," the statement said.

"We acknowledge the grave abuses that were committed by some members of our Catholic community; physical, psychological, emotional, spiritual, cultural and sexual."

"The Catholic Bishops of Canada express our profound remorse and apologize unequivocally," says the statement.

As a part of the conference's pledge to address its role in the cultural genocide of Indigenous people in Canada, it says that it will raise funds across the country to support regional Indigenous groups with projects defined at the local level.

The conference also pledges to make an effort to listen to Indigenous Peoples, including the survivors of residential schools, in order to "educate our clergy."In a statement, Assembly of First Nations National Chief RoseAnne Archibald expressed mixed feelings about the apology.

"On one hand, their unequivocal apology is welcomed," she said.

"However, I am disappointed that the Canadian Conference of Catholic Bishops did not take the long overdue step of passing a motion/resolution to formally invite the Pope to Canada to offer his apology to First Nations and Indigenous Survivors and intergenerational trauma survivors here on Turtle Island."

She said she would continue to seek an apology from Pope Francis in person "on our sacred lands."

"The fact remains that the church raised less than 15 per cent of the $25 million that it promised in 2006 as part of the IRS settlement," she said.

"The words of the apology speak to a commitment by the Catholic Church to the healing path forward with First Nations and Indigenous peoples," she continued. "Only time will tell if concrete actions will follow the words of contrition by the Bishops."

David Chartrand, president of the Manitoba Métis Federation and vice-president of the Métis National Council, welcomed the apology but said they also want to see the Pope apologize in person.

"We commend the archbishops, the CCCB and the new president of the conference for their important words," he said in a statement.

"During our meeting with Pope Francis, we will express the importance of an apology that comes directly from him, delivered on our home soil and spoken directly to the people the residential and day school systems harmed, as we know that is the path to healing."

Mary Ellen Turpel-Lafond, the director of the Indian Residential Schools History and Dialogue Centre at the University of British Columbia, says the apology is an important step but that its language is unclear in a significant way.

"The statement is welcome. I think it's stronger than what I've seen in the past from the Catholic Bishops of Canada, but it still has some limitations in it," she said in an interview.

Turpel-Lafond says the words "some members of the Catholic community" makes it sound as though the apology is for the acts of individuals, rather than the Roman Catholic Church's role as an institution in the residential school system.

"That makes it a little hard to understand what they're apologizing for.… The entire system involved trying to 'remove the Indian from the child' and was, in the view of some people like myself, a genocide," she said.

Turpel-Lafond added she hopes the apology will lead the Catholic Church to meet financial obligations to residential school survivors, as well as provide reparations to Indigenous communities, and to create a single access point for records regarding missing children and unmarked burials.

"They have come forward with half apologies, and promises, that I don't see any concrete action from them yet in terms of acknowledging the truth of what happened in Indian residential schools," she said.

"They should work with Indigenous communities to find solutions to address the problems that they've created."

Since the early spring, several Indigenous communities across the country have reported that hundreds of unmarked graves have been located at the sites of former residential schools.

The remains of 215 children were discovered in Kamloops, B.C. Indigenous officials in Saskatchewan also said ground-penetrating radar had detected more than 700 unmarked graves at the former Marieval Indian Residential School east of Regina.

In June, the Lower Kootenay Band in British Columbia said a search with ground-penetrating radar had found what are believed to be 182 human remains at a site close to a former residential school in Cranbrook.

The CCCB said it would do its part to help locate more unmarked graves at residential schools.

"We commit ourselves to continue the work of providing documentation or records that will assist in the memorialization of those buried in unmarked graves," the statement said.

In June, the CCCB announced national Indigenous leaders will meet with Pope Francis at the Vatican in December. A delegation of First Nations, Métis and Inuit will meet with the Pope separately between Dec. 17 and 20.

"What the Pope said and did in Bolivia is what he will do in Canada," he said. "But he will gear it for the specifics of the Canadian situation."

In today's statement, the bishops said they "pledge to work with the Holy See and our Indigenous partners on the possibility of a pastoral visit by the Pope to Canada as part of this healing journey."