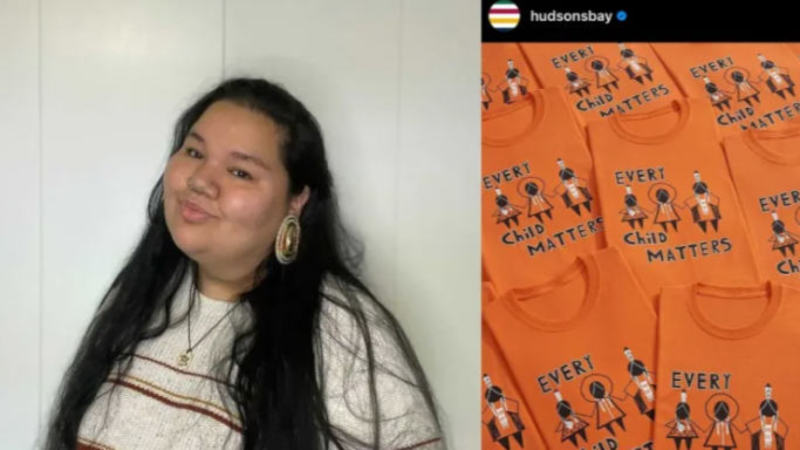 With the first National Day for Truth and Reconciliation coming up, many Canadians are trying to get their hands on an orange shirt, to commemorate what was previously known as Orange Shirt Day.

But recent social media posts led to some Indigenous people asking whether one major retailer was trying to profit off of the painful legacy of residential schools.

In an Instagram post earlier this week, The Hudson's Bay Co. said it is selling orange shirts with the slogan "Every Child Matters."

Dani Lanouette, who is Anishinaabe from Neyaashiinigmiing and Algonquins of Barriere Lake, says she had posts from the retailer blocked on Twitter for years.

"To see a company that has a very colonial history — a history of colonial violence within so-called Canada — to see that they were now selling orange shirts actually made me nauseous. It was so gross to me."

A Hudson's Bay spokesperson told CBC the company did not mean to cause any confusion about the sale of the shirts, and said they were made available for purchase in collaboration with the Orange Shirt Society, a B.C.-based non-profit that works to create awareness of the effects of residential schools.

All of the proceeds from the sale of the orange shirts will go to the non-profit "to support their work to commemorate the residential school experience, to witness and honour the healing journey of the survivors and their families, and to the ongoing process of reconciliation," the spokesperson said in a statement sent to CBC on Saturday.

The Hudson's Bay Co. is one of the oldest companies in Canada, and in fact existed long before Canada even became a country in 1867. Prior to then, the company actually served as a de facto government in parts of North America.

"If we look at the area where the Hudson's Bay Co. kind of took over and set up all their trading posts and stuff, it's all Indigenous land," said Lanouette, who became interested in the history of the company as a teen.

In 1868, a huge chunk of land owned by the company was sold to the Dominion of Canada under The Rupert's Land Act, which resulted in a large part of the Prairies — including Manitoba — joining Canada.

The HBC spokesperson's statement said the company "recognizes the role it played in the colonization of Canada," and is proud to work with the Orange Shirt Society "as part of our commitment to truth and reconciliation."

But for Lanouette, the Bay's more recent history is problematic.

"When we look at their history, even within the past 100 or so years, [Hudson's Bay had a] role with Inuit [and] the high Arctic relocation program where families were taken from … northern Quebec to Nunavut," she said.

In 1953 and 1955, a group of 87 Inuit were persuaded by the Canadian government to leave their homes in Quebec, with promises of better hunting and the option to return in two years — promises that were broken.

"There was only a Hudson's Bay trading post up there," Lanouette says, and "they really [played] a role in the starvation of Indigenous peoples and in food insecurity today."

For her, the main issue with the Bay now selling orange shirts is the perception the company is profiting from the experiences of Indigenous survivors who were forced to attend residential schools, many of whom suffered horrific abuse.

"I think they should actually just be giving reparations without needing to sell anything or … rely on consumers to make that donation for them through purchasing a shirt," said Lanouette.

She also questions how the Bay represented the personal story of Phyllis Webstad, which inspired the Sept. 30 Orange Shirt Day observances that came before the newly established National Day for Truth and Reconciliation.

In 1973, on Webstad's first day at the St. Joseph Mission Residential School in B.C., the then six-year-old's favourite orange shirt — which had been given to her by her grandmother — was taken from her as soon as she arrived at the school.

The orange shirt has since become a symbol of remembrance for those who were forced to attend the residential schools.

In an HBC Instagram story, the retailer stated Orange Shirt Day "grew out of Phyllis's account of losing her new orange shirt on her first day of school."

"In reality, it was stolen from her."