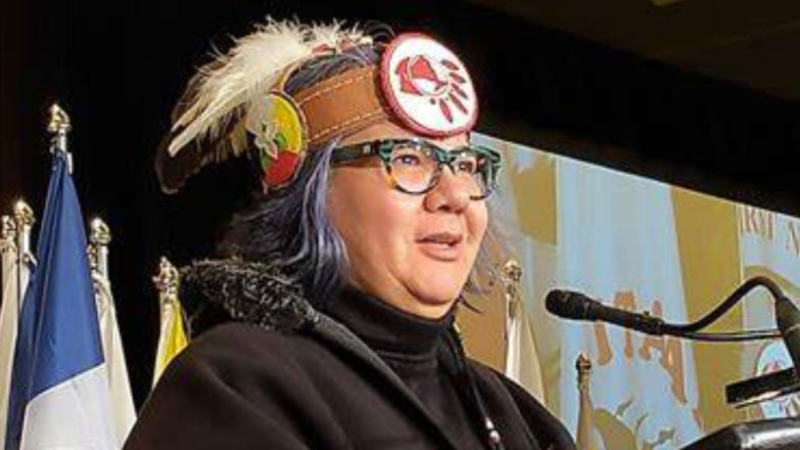 Just days after a report on allegations of bullying and harassment against Chief RoseAnne Archibald was leaked — and hours after she was elected the new national chief of the Assembly of First Nations — Archibald said today she would support the implementation of a whistleblower policy at the AFN.

"I have been the victim of workplace harassment and I know what that feels like," she told a morning press conference.

"For too long, organizations like AFN have allowed this kind of behaviour to continue and we need to change that and I'm committed to bringing that change."

An internal AFN report looking into allegations of harassment and bullying by Archibald was shared with CBC on Wednesday morning. The report offers no details of the allegations.

The report, dated May 3, 2021, was drafted by an independent investigator hired by the AFN to look into informal complaints from employees.

Archibald, the former Ontario regional chief, won the race to replace Perry Bellegarde as AFN national chief last night. The report names her as "the respondent," but Archibald was not interviewed by Hatt.

Archibald said today that she could not "comment on a confidential report."

She also didn't commit to a financial audit of the AFN — something she pushed for as Ontario regional chief.

The report says "potential complainants" feared being identified and attacked on social media if they went public with their complaints.

"The most consistent concern raised by the Potential Complainants was their belief that the AFN could not protect them from or stop a (or any) Regional Chief's reprisal actions, comments, or conduct," reads the report.

The report says that when Archibald was made aware of the investigation, she posted a public letter dated February 22, 2021.

"It is clear to me that I continue to be a target of the AFN, resulting from advancing the COO (Chiefs of Ontario) resolution seeking an independent financial review of the AFN," Archibald wrote in the letter. "The hostile environment at the AFN has negatively impacted my ability to feel safe while working on the AFN Executive Committee ...

" ... Instead, what has taken place is an effort to discredit, humiliate, shame, and dehumanize me. I have decided that I will not participate in this attempt to sideline the concerns of the Ontario Chiefs. The concerns raised by COO around the financial irregularities at the AFN are serious and legitimate issues that ought to be addressed in an expeditious and transparent way."

Hatt said she could not confirm that those who made complaints against Archibald had, or would have, experienced repercussions as a result. She said the complainants genuinely believed there would be consequences if they filed formal complaints.

A section of the report cites concerns about interference with the investigation.

The report says that Hatt learned in March "through correspondence sent by [Archibald's] legal counsel to Janice Ciavaglia" — the AFN's CEO — "that [Ciavaglia] was asked if she was, or was not, a witness or complainant."

"These questions were posed openly and directly in a meeting," the report continues. "In addition, the AFN CEO was then asked to confirm in writing to [Archibald's] legal counsel that she was not a witness or complainant.

"For [Archibald] or a person in authority (such as any Regional Chief), to demand or require an employee to confirm if they are a witnesses or complainant is a violation of the employee's privacy, the workplace policies, and impacts the integrity of the investigation."

One complainant was quoted as saying in Hatt's report that if "that can happen to the CEO, I cannot be protected."