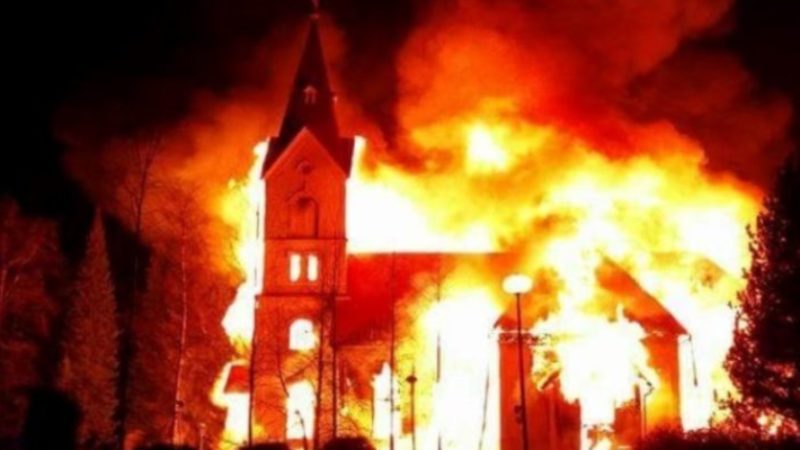 A group of residential school survivors is calling for an end to arson attacks on churches after several Catholic and Anglican churches were vandalized or damaged by fire following the reported discovery of unmarked graves at former residential school sites in British Columbia and Saskatchewan.

"It's not going to bring back anybody," she said.

Jenn Allan-Riley, a Sixties Scoop survivor and the daughter of a residential school survivor, said the acts of vandalism are sowing discord between Indigenous people and the rest of Canada.

"Burning down churches is not in solidarity with us Indigenous people," Allan-Riley told the news conference.

"Whoever is doing this, you're going to wake up a very ugly, evil spirit in this country," she said.

The Truth and Reconciliation Commission included a demand for a formal apology from the Catholic Church for its role in running residential schools among the "calls to action" in its final report.

While the church has yet to issue such an apology, Indigenous leaders are set to meet with Pope Francis at the Vatican in December.

Pope Benedict XVI expressed "sorrow" to a delegation from Canada's Assembly of First Nations in 2009 over the abuse and "deplorable" treatment that residential school students suffered by the Roman Catholic Church, but Indigenous leaders have called for Pope Francis to go further by apologizing and asking for forgiveness on the church's behalf.

The Roman Catholic Church is the only institution that has not yet made a formal apology for its part in running residential schools in Canada, although Catholic entities in Canada have apologized.

"It is a shame and indeed it is something that will prevent people who will seek solace in times of grief from being able to visit their own places of worship when they've been vandalized or burned," Trudeau said.

"It is not the way forward."

Trudeau also condemned the toppling of two statues — one of Queen Victoria and one of Queen Elizabeth II — on the grounds of the Manitoba Legislature on Thursday.

"I fully understand the anger ... and the grief that so many people are feeling," he said when asked about the statues.

"But we need to move forward as a community, we need to listen to that anger, to that grief, and make reflections around how we commemorate and honour historical figures, [or] whether we do."