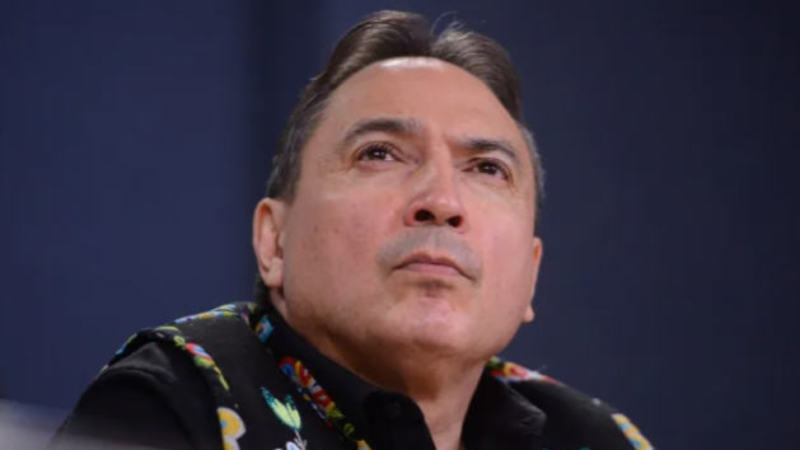 First Nations leaders from across the country are meeting virtually this week to elect a new national chief of the Assembly of First Nations.

The election is slated to take place Wednesday during the AFN's 42nd annual general assembly, hosted this year virtually by Six Nations of the Grand River and the Mississaugas of the Credit First Nation in Ontario.

"As leaders, it is our responsibility to collectively set the path that leads to a brighter future for our children and grandchildren," outgoing AFN National Chief Perry Bellegarde said in a speech to delegates on Tuesday.

"It has been my greatest privilege to play a part in that with you all."

Bellegarde, who is a member of Little Black Bear First Nation in Saskatchewan, was first elected to the role in 2014 and announced last December that he would not be seeking re-election.

He was given an eagle feather by AFN resident elder Mike Mitchell. Mitchell commended Bellegarde on his advocacy for Indigenous languages.

"He relied a lot on his culture, ceremony, and his language," said Mitchell.

"It got us through a lot of meetings because it strengthened our spirits."

Only band council chiefs or their proxies are eligible to vote. To win, a candidate must secure 60 per cent of the votes.

The majority of Tuesday's discussions were on a resolution that was tabled to delay the election over concerns expressed by chiefs and leaders about the fairness of proceeding with an online election during the pandemic.

"We are in an unprecedented time. This pandemic is something that we've never seen before as First Nations people," said Khelsilem, an elected council member and spokesperson for Sḵwx̱wu7mesh Úxwumixw in B.C.

"We anticipate that there will be an election federally coming soon but here we are today with a very small portion of the AFN delegates that are here and that could be here."

The AFN says it represents more than 900,000 people living in 634 First Nation communities and in cities and towns across the country.

Roughly 164 chiefs and proxies were in attendance at the virtual meeting Tuesday. Khelsilem and other leaders cited concerns over Internet access, a wildfires crisis in B.C., as well as ongoing trauma many First Nations across the country are dealing with following the discovery of unmarked remains at former residential school sites.

Those in attendance voted 62 per cent in favour of moving forward with the election as scheduled.

"There's just too many issues that we have to deal with. We're in the midst of a crisis," said Leroy Denny, chief of Eskasoni First Nation in Nova Scotia.

"We need a person that will advocate and speak for the assembly at the federal level, to lobby for these issues. There's just too many issues and we need a leader."